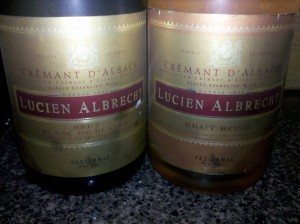 While Champagne is the best known of all sparkling wines (deservedly so), there are other parts of France that also produce bubbly and at modest pricing. Wines like this pair from Luicen Albrecht are affordable, tasty and will serve your dinner table well for a wide variety of cuisine.FULL DISCLOSURE: Both of these wines were samples courtesy of Pasternak Wine Imports.

Also of note, both of these wines were tasted in a “review” style, which means I chilled them, sampled them without food and did not enjoy them as per my usual means. Again, context in reading any wine review is important.

Lucien Albrecht is one of the oldest families producing wine in Alsace, one of the most unique regions in all of France. Not only will you notice many German sounding names on the labels, you’ll also note most of the still wines are actually labeled in a familiar fashion, with the grape variety used.

The Albrecht’s have roots in the region that trace back as far as 1425, meaning their family has been there for nearly six centuries. Eighteen generations later, the family is one of the largest holders of prime hillside vineyards in the region. It was Lucien Albrecht, father of current proprietor Jean, who was one of the founding fathers of Cremant, the term seen on most sparkling wines made in France outside of Champagne.

Also of note, both wines are made in the traditional methode, which means they follow the same procedures as are used in Champagne. The critical step which separates most sparkling wines is where the secondary fermentation (the one which gives it the magical tongue tickling bubbles) takes place and when you see traditional method, you know it took place in the bottle.

The first wine I tried was the Lucien Albrecht Brut Blanc de Blancs (12% ABV). One thing I’m a bit confused on is that somehow in my notes I got it in my mind the wine was produced from 100% Pinot Blanc, but according to the tech sheet on the importer’s website, it is a blend of 80% Pinot Auxerrois, 10% Pinot Blanc and 10% Chardonnay. The wine exhibited bright and racy flavors, primarily of tart white fruit, all wrapped up in a light body with plenty of verve. I’d pair this with light appetizers or enjoy on its own on a hot day. For the price point, I think you can do better, but I’d stillDRINK this without any hesitation.

Up next was the Lucien Albrecht Brut Rosé (12% ABV), which is 100% Pinot Noir. This was the real winner for me and confirmation of the quality in the bottle, as this is probably the third time I’ve had the wine. It was a bit rounder and softer on the palate, more of what I’d call a medium body. Flavors were of bright and tangy red fruit, like a big shot of cranberry with a whiff of ripe watermelon in the undertones. I thought this was a great drink and a fantastic wine to pair with sushi, as the acidity wasn’t so high as to bury the delicate flavors of that particular Japanese delight. A definite BUY, so long as you are paying no more than $20 or so.

Overall, a very nice pair of wines and I doubt many folks would be disappointed with either.